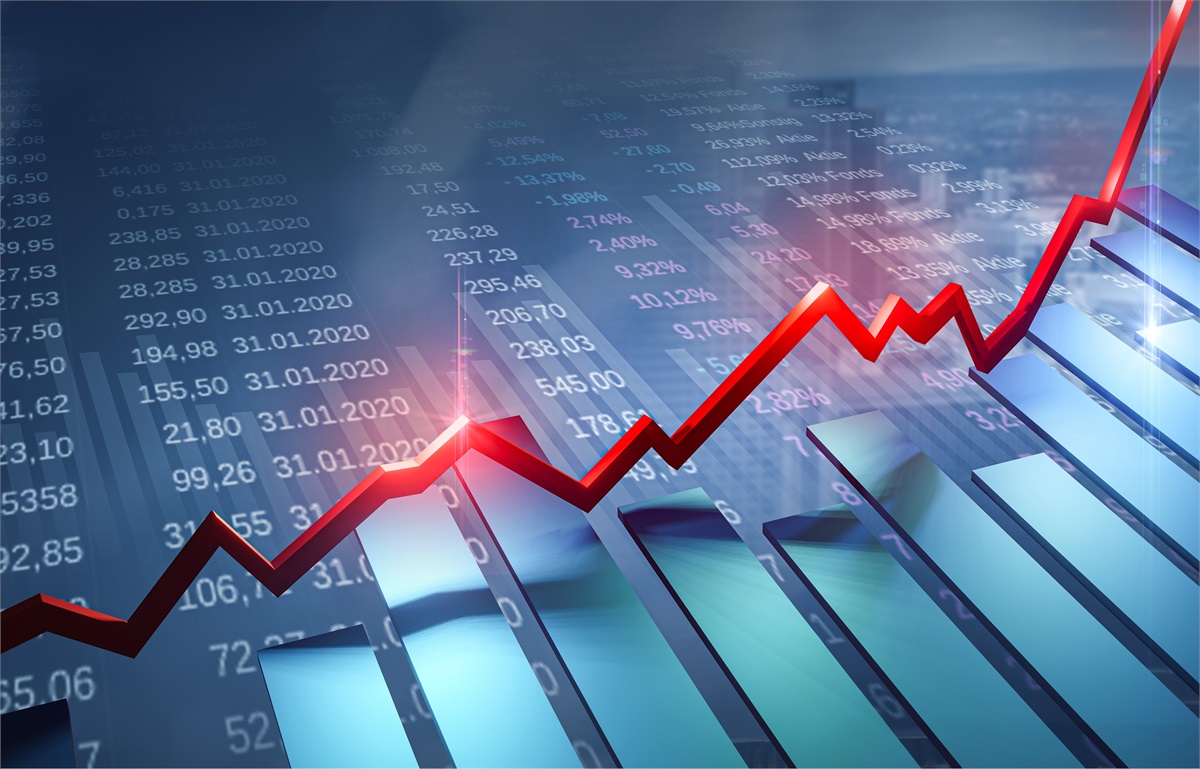 The spread of Covid-19 increased in dramatic fashion last week, especially in the Sun Belt and the South, with Arizona, California, Texas, and Florida posting single-day all-time records for new cases. Confirmed cases in the U.S. overall have topped 2.9 million and there have been more than 132,000 deaths resulting from the virus.

The reason for the market’s exuberance? Covid-related caution was largely offset by vaccine optimism and surprisingly strong jobs numbers from the U.S. Before the holiday weekend, markets processed a flurry of largely positive economic data.

Not only did the Consumer Board Consumer Confidence Index® surprise to the upside at 98.1 vs. an expected 91.5, but Thursday’s jobs report positively stunned markets: 4.8 million new jobs were added — nearly 1.6 million more than expected [Figure 1]. The overall unemployment rate also dropped from 13.3% to 11.1%. 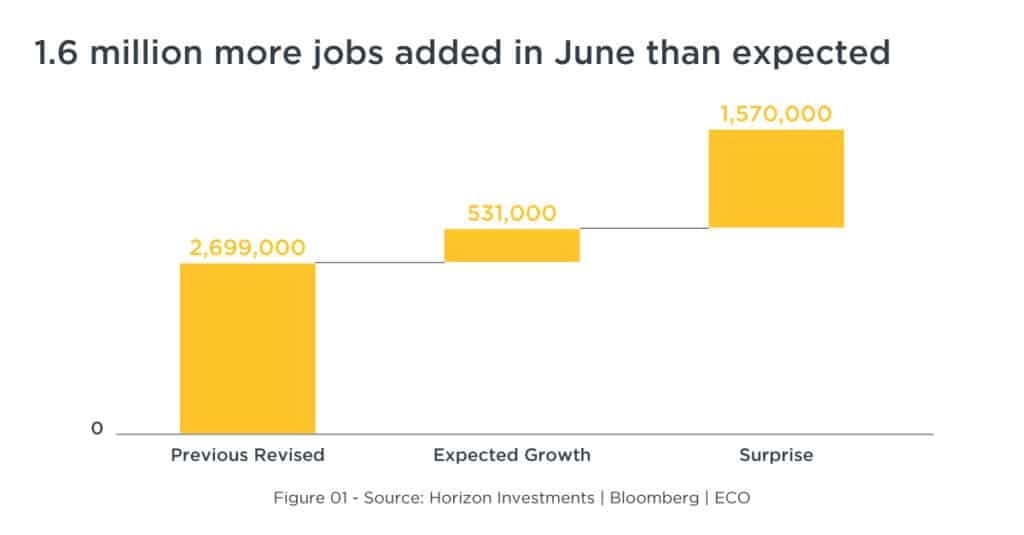 The best way to sum up incoming U.S. economic data these last few weeks? WAY stronger than expected, even historically so. By way of example, the Citi Economic Surprise Index for the U.S. saw its best reading ever dating back to its inception in 2002 [Figure 2]. 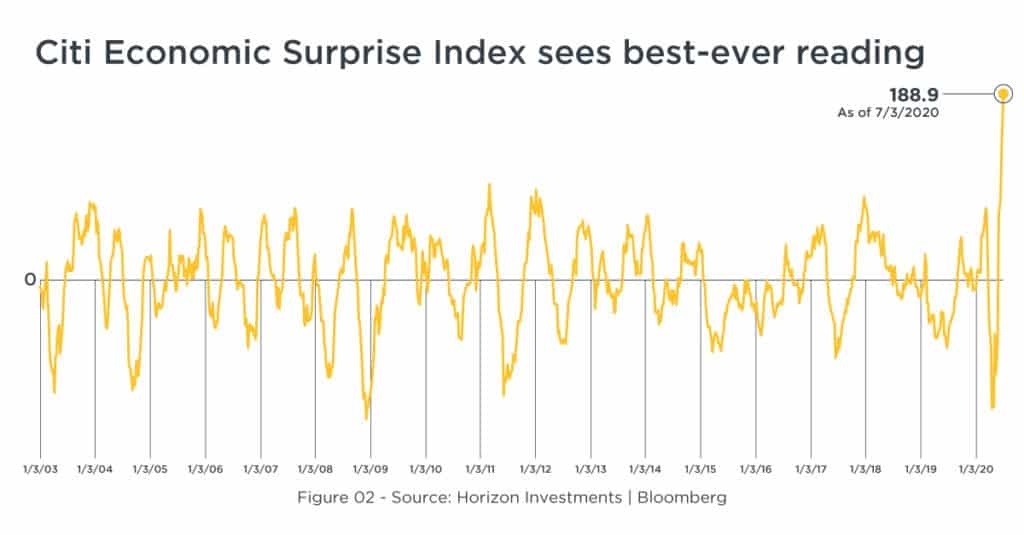 Markets also moved higher last week on the prospect of additional fiscal stimulus. President Trump told Fox Business that he supports another round of direct payments to individuals. With support from the White House, there’s potential for another wave to be disbursed as soon as the end of this month. Also, SBA extended its successful PPP until August 8th.

Despite comments by White House Trade Advisor Peter Navarro two weeks ago that the trade agreement was “over” (comments that were quickly walked back by the White House), markets don’t appear to be trading under the assumption of a renewed trade war—yet.

While the Senate passed a bill on Friday to sanction Chinese banks over the Hong Kong security bill, President Trump has yet to sign it.

Government bond yields rose modestly last week, driven higher by equity strength and positive expectations surrounding additional fiscal stimulus and vaccine optimism. The curve was a bit steeper with the 2-year down 1 basis point (bps), the 10-year up 2 bps, and the 30-year up 6 bps.

As we noted last week, it’s been a quiet quarter in the government debt market. Yields were almost completely range-bound — in a tight range — the entire quarter. Credit spreads also tightened last week in lockstep with the equity market: investment-grade credit down 7 bps and high-yield down 30 bps.

The Fed’s balance sheet shrunk again, for the third straight week. As we noted previously, rather than being a cause for concern, it’s a testament to how effective the Fed has been in restoring market function.

This decline is due to the rolling off of U.S. dollar funding transactions with foreign central banks initiated during March. Now that markets have calmed down, this excess liquidity is no longer needed to keep the USD from appreciating. The broad USD was down 2% in Q2.

As we’ve been saying for months now, U.S. yields aren’t going anywhere for a few years at least. Expect 10-year rates to stay under 1.0% (and probably lower) through 2022, at the earliest.

What to watch next

In trading before U.S. markets opened on Monday, July 6th, the China Shanghai Composite soared nearly 6%, its biggest single-day gain since 2015. The rally was largely fueled by a state media report on the importance of cultivating a “healthy bull market.” We’re still watching China’s road to recovery. With China stocks now solidly up on the year, could this be the start of a prolonged bull market?

The Institute for Supply Management (ISM) just released its survey of U.S. non-manufacturing companies on July 6th. The ISM Index saw its single biggest increase since the survey was created in 1997. It showed the services sector of the U.S. economy rebounding strongly from 45.4% in May to 57.1% in June — nearly back to pre-pandemic levels [Figure 3]. 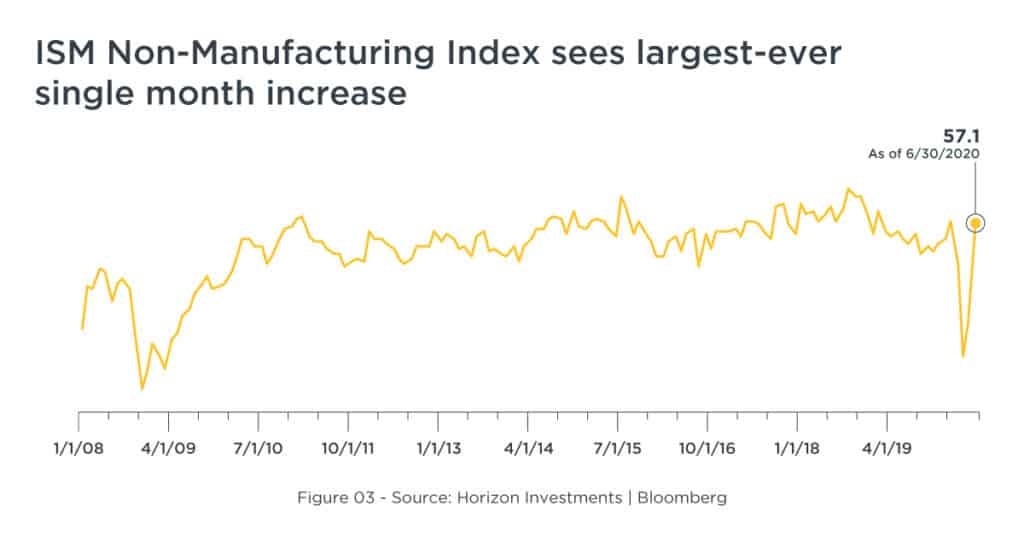 Because of the ever-changing situation with the virus, we haven’t settled into a new normal yet. It’s clear that reopening brings greater risk of virus spread. High-frequency data, in-person credit card usage for example, is proving to be of some help even in predicting where increases in infections are likely to show up. While some states have already delayed reopening phases or even rolled back their progress, how much states’ efforts to contain the virus slow down the recovery’s progress remains to be seen. July data will be worth watching closely.

There were 1.43 million new claims last week, higher-than-projected. This week’s consensus of 1.35 million is only slightly lower. Continuing claims have also edged up higher. So despite the surprising number of new jobs added last week, the layoffs appear to be continuing. The big concern is, if the virus isn’t contained, more prolonged shutdowns could erode any progress on jobs that we’ve already made.

Last week’s report of a big June bump in consumer confidence may partly explain the market’s willingness to brush off Covid fears or any incongruity in jobs data. While confidence is on the rise, however, it still falls well below pre-pandemic levels. And the June survey likely missed most of the increase in Covid spread at the end of the month. So, it will be important to see if consumer sentiment continues to tick up as we move forward, and especially for the month of July.