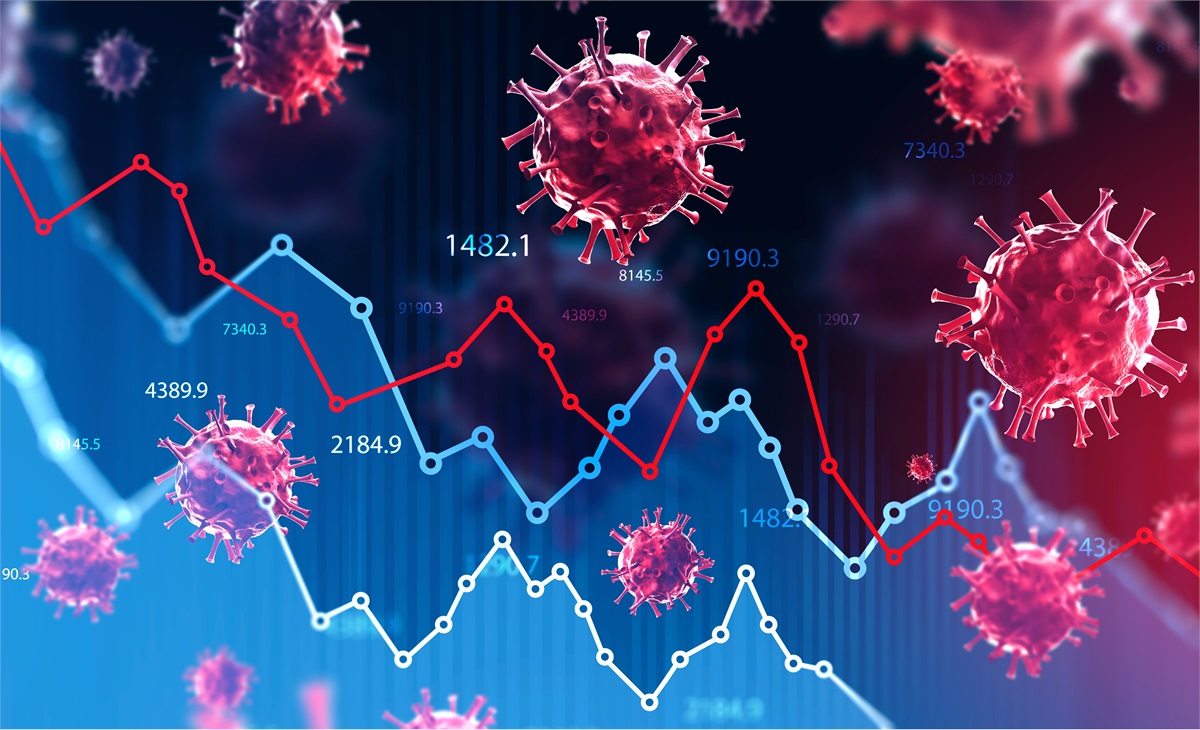 Equities had a good week last week, shaking off the negativity from the end of the week prior and closing up 2.5% on a global basis (MXWD). Domestic equities led the charge, closing at the highs on Friday, with the S&P 500 up 3.6% (SPX). International developed markets (+0.9% MXEA) and emerging markets (MXEF -0.5%) lagged. Some of this performance disparity is due to timing differences and holidays; ETF index tracker returns were much closer together.

Small caps (Russell 2000) outperformed last week by about 200 basis points, but we’ve seen this price action a few times this year, typically driven by short covering. Zooming out, small caps remain 11% below large caps YTD. Amazingly, large-cap tech has seemed relatively impervious to the ups and downs we’ve seen in other asset classes. In fact, the NASDAQ is up 2.1% on the year [Figure 1].

Large cap tech companies tend to be healthier companies with better cash flow and debt dynamics. And because they’re actually growing, investors right now are willing to pay more. What does this tell us? Investors are still a bit scared and skeptical. This is a defensive rebound and the market just isn’t as confident on future growth as the overall rally off March lows would seem to suggest. If it were, you’d likely see small caps and value stocks start to outperform. 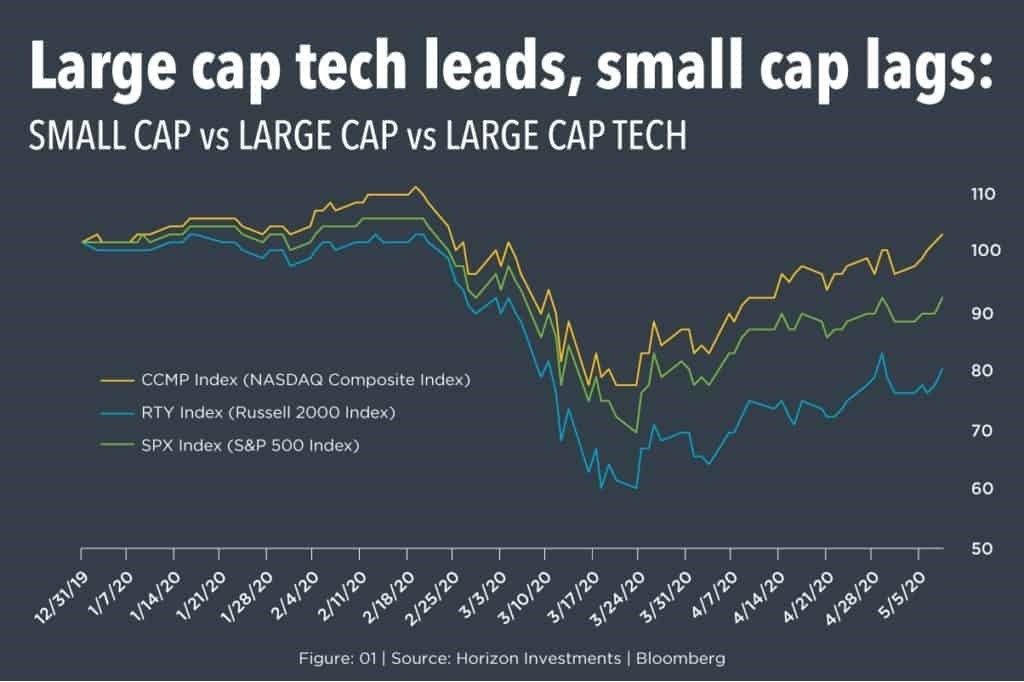 Realized volatility down ~80% from highs

Volatility has come way down. Two-week realized S&P 500 volatility is now in the mid 20s, down approximately 80% from its peak [Figure 2]. Options markets have normalized in recent weeks too, which is a far cry from the extreme fear we saw priced into options in March and April. Interestingly, we still see a bump in S&P 500 option volatility toward the end of the year that then tapers off. Investors appear to be buying protection around the time of the U.S. Presidential Election, perhaps in response to the rising odds of a Democratic sweep, which market participants generally view as a negative for equities. 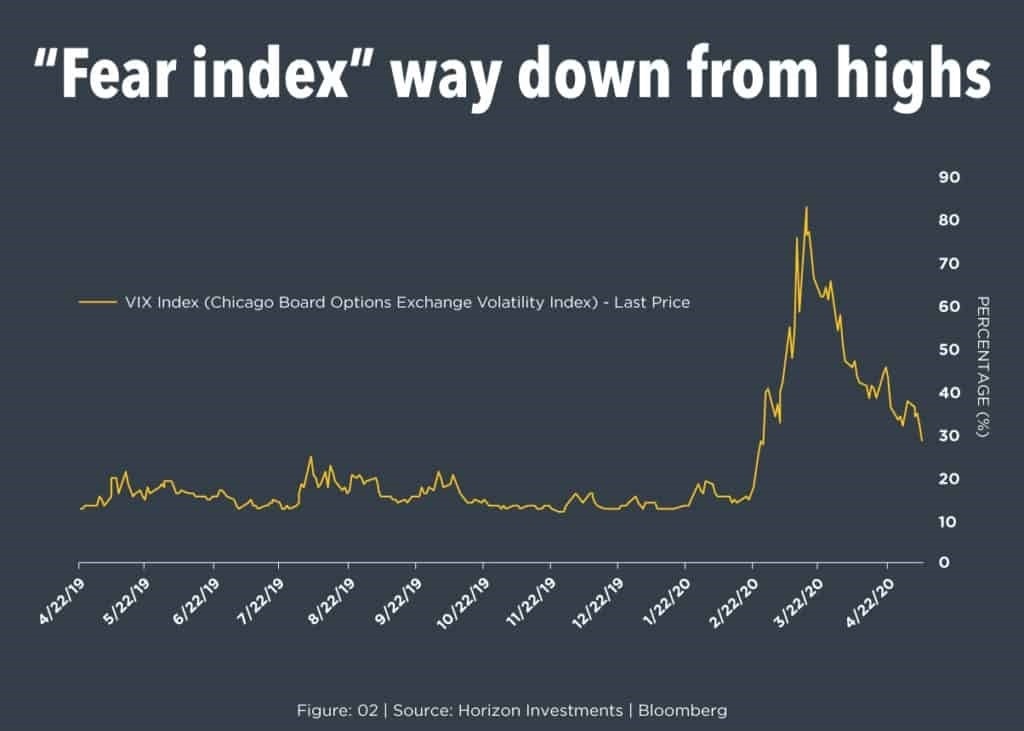 The yield curve steepened yet again, led by a move higher in back-end interest rates. The 2-year U.S. Treasury yield fell 3 bps, while the 10-year and 30-year rose by 7 and 13 bps, respectively. But don’t get carried away — the 30-year yield is still only 1.39%, back to its closing level from the third week of March. For reference, it was 2.01% on the day the S&P 500 hit all-time highs in February.

The Quarterly Refunding Statement from the U.S. Treasury was the driver of the steepener trade. The amount — a truly staggering $3 trillion of debt issuance over 3 months — wasn’t the issue; it was the maturity breakdown. In addition to reopening the 20-year bond, the Treasury will issue more debt at the longer end of the curve than anticipated. While long-term rates have risen in recent weeks, they’re still very low. The Fed’s lower-for-longer stance should keep them low, despite the increase in supply.

Since the Fed is basically on hold for as far as the eye can see, volatility (and the yield) of the 2-year note is approaching zero. For the curve watchers out there who believe an inverted yield curve portends recession, that means 2s10s is no longer the market standard; switch to 5s30s instead.

Credit had a decent week, with Investment-grade (IG) spreads flat and high-yield (HY) spreads falling 18 bps. Issuance, especially in IG, has been incredibly strong and on a record-setting pace, showing the power of the Fed backstop. That backstop isn’t unlimited, however, as United Airlines had to pull a deal last week due to weak demand. Leverage already in the system is increasing, as more and more companies borrow to stay viable. Because that debt will be there for years and years to come, we’d encourage investors to be selective in the credit space, and especially cautious in the HY market. After all, though the Fed announced its willingness to buy corporate bonds, it hasn’t actually purchased any yet.

Fed funds futures traded with negative rates this week. While the market is clearly not anticipating any rate hikes for at least the next 2-3 years, the Fed is not keen on going below zero. Having been whipped around by market pricing, Chairman Powell late in the week announced a surprise speech on Wednesday, where he’ll likely address the prospect of negative rates head on.

Trade negotiators from China and the U.S. spoke by phone last week for the first time since January, but little information was released from the call. The rhetoric between the two largest economies has ratchetted higher recently. On top of that, the collapse in global growth has caused delays in the implementation of the Phase One trade deal. We’ll be watching this situation closely, as we expect tensions could increase, especially in the run up to the U.S. Presidential Election.

Friday’s report from the Labor Department showed a staggering 20.5 million jobs lost in the month of April. The unemployment rate skyrocketed to 14.7%. While the highest reported since the Great Depression, the rate is most likely much higher than that. Even Treasury Secretary Mnuchin told the media that “the reported numbers are probably going to get worse before they get better.” Given that considerable assumptions were made to arrive at last week’s number due to the carnage in the labor market, we expect the unemployment rate to be revised upwards in the future.

Even more striking is the picture painted by the current employment to labor force population ratio, which is now lower than ever reported at 51% [Figure 3]. That means there are fewer people working now, as a percentage of the total population, than there were before women meaningfully entered the U.S. workforce in the 1960s and 1970s. An even deeper look at unemployment data shows that average hourly earnings have increased significantly, meaning those most affected by job losses are likely lower paid workers. This not only exacerbates trends we saw before the crisis of a growing wealth gap, but it also hurts those consumers who tend to have a higher propensity to spend. 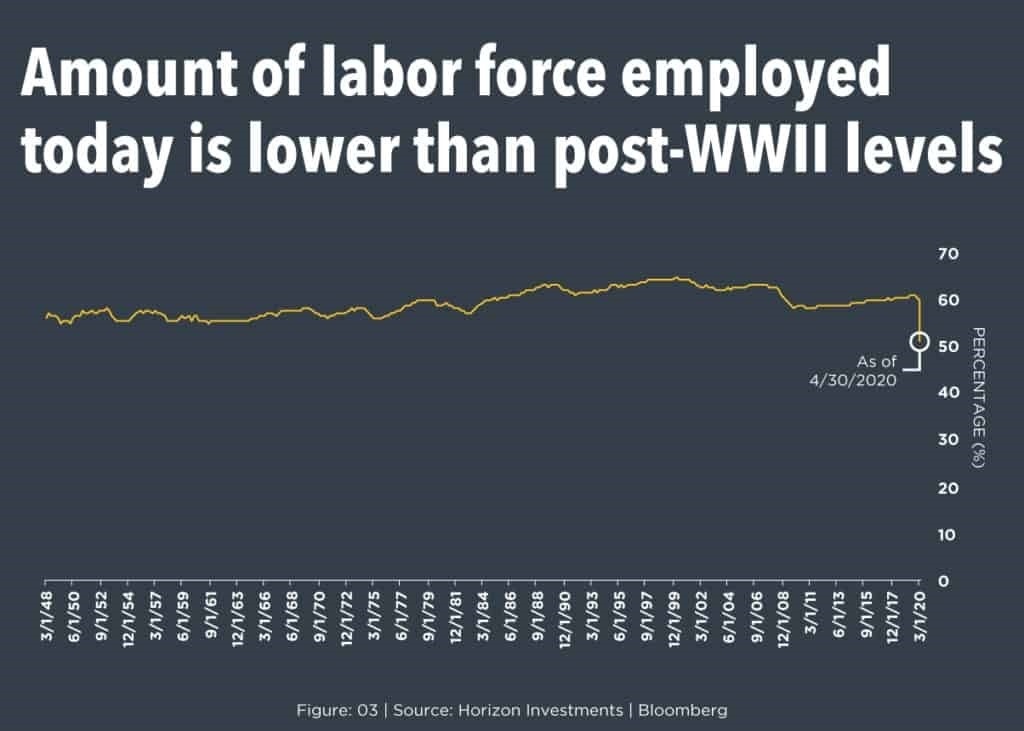 More than half of U.S. states reopening

About half the U.S. states are reopening, with even California, which had one of the strictest lockdowns, relaxing some restrictions. After Friday’s horrific jobs report, showing a post-war high in the unemployment rate of 14.7% (with the actual likely 5+% higher) [Figure 3], you can understand why.

Market narrative running ahead of growth?

If there’s one thing 2020 has made remarkably clear, it’s that the market is not the economy. Last week’s performance is further evidence of that. The market decline we saw in March was one of the sharpest and most precipitous ever. It was also one of the shortest, due to massive intervention from the Federal Reserve and U.S. government. At this point, a lot of the “good news” is already priced into the market. We’ve already gotten the bump from the Fed stimulus and the quicker rebound being talked about. So while the Fed’s bazookas may have spared the market a lot of added pain, a truly robust return to growth is likely to be slow. After all, the economic impact of COVID-19 by many measures — unemployment among them — has been downright devastating.

While one can reasonably argue there is no correlation between GDP growth and market performance, at least not one that exists within any reasonable timeframe, last week’s catastrophic unemployment data may support a more bearish outlook on the future. If you think of output as (total number of employed people) x (how much each produces per hour), it’s not unreasonable to expect GDP will shrink. At the least, it makes one wonder whether the market, which has rallied largely on the Fed’s intervention, is running too far ahead of growth? Markets have thus far looked through this data. But to justify the current rally off the lows in March, we’ll need to see a quick reboot in activity.

Hard data coming up next

While uncertainty remains, we are getting more hard facts as time goes on. It will be important to assess whether the data supports the market’s narrative. In other words, as the economy reopens will consumers likewise start to spend money? Will businesses be able to stay up and running?

Here’s the data we’re looking at this week:

University of Michigan Consumer Sentiment Index – Seen as a gauge on consumers’ willingness to spend, preliminary index data comes out this week, which may help assess how receptive the average consumer is likely to be to the economy reopening.

China Retail Sales – Retail sales on Friday will be especially telling, as they give us our first glimpse of consumer spending for the month of April. While China ramped up relatively quickly, the question is whether it has now stabilized at lower levels, which could throw cold water on any hope of a V-shaped recovery.

Jobless Claims – Out on Thursday, expectations are for this number to continue coming down, albeit slowly. Continuing claims, as opposed to new claims, may be a better measure to track from here.