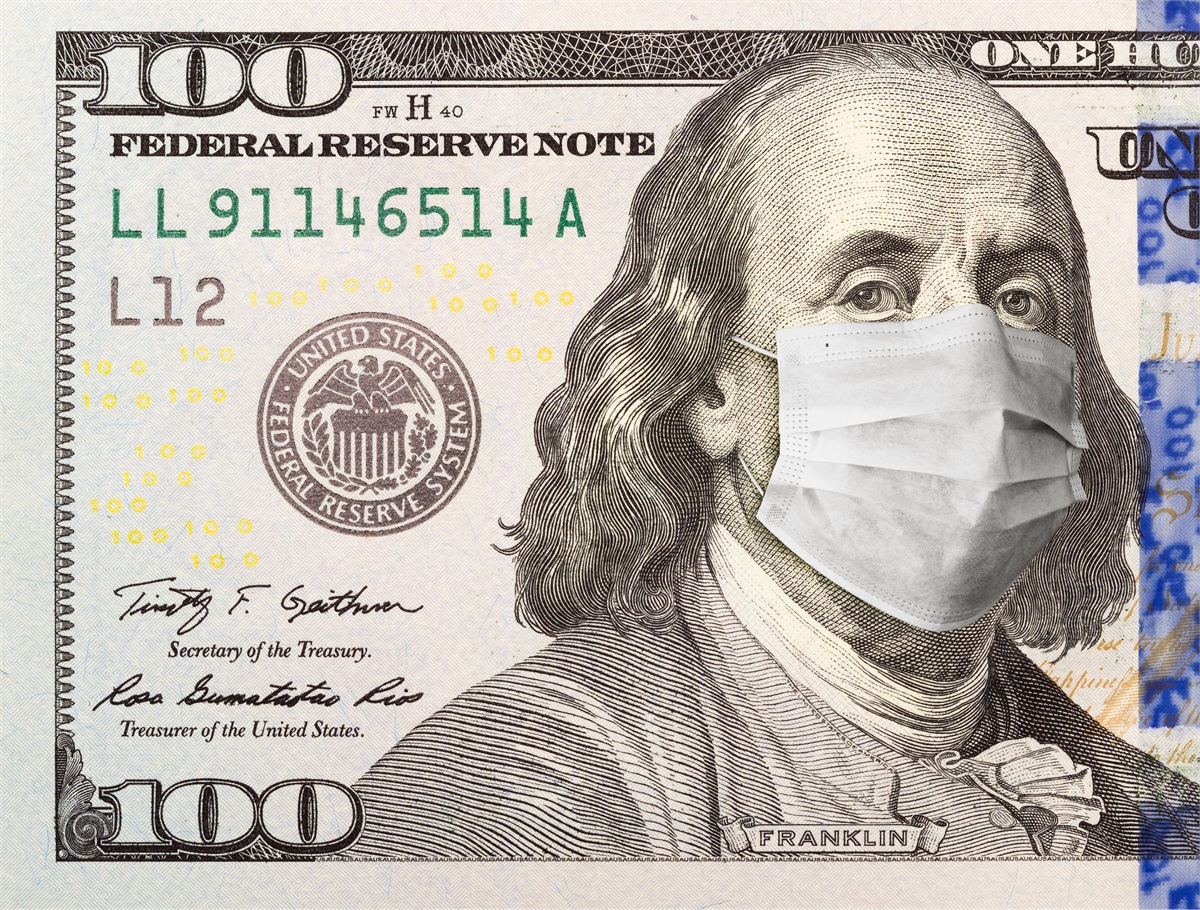 Stock markets climbed the wall of worry last week, closing up 2.9% globally (MXWD) as hopes around a coronavirus vaccine and the loosening of restrictions in the U.S. outweighed the rising tensions between the world’s two largest economies, the U.S. and China.

Domestic shares outperformed (SPX +3.3%), while emerging markets lagged due to weakness in Asian markets (MXEF +0.5%). International developed markets gained 3.0% (MXEA). Remarkably, despite the steep losses in the first quarter of 2020, the S&P 500 is now actually up about 6.5% from where it was a year ago [Figure 1]. As of midday Tuesday, it was trading over the psychologically important 3,000 level, last seen in the first week of March. For now, the market seems to be overly receptive to good news and more than willing to discount details that could paint a less-than-rosy picture of the future.

Promising news around a potential vaccine and enthusiasm for reopening drove equities higher in a pro-cyclical fashion early in the week. Small caps and value outperformed, although some of that strength faded as the holiday weekend drew near. 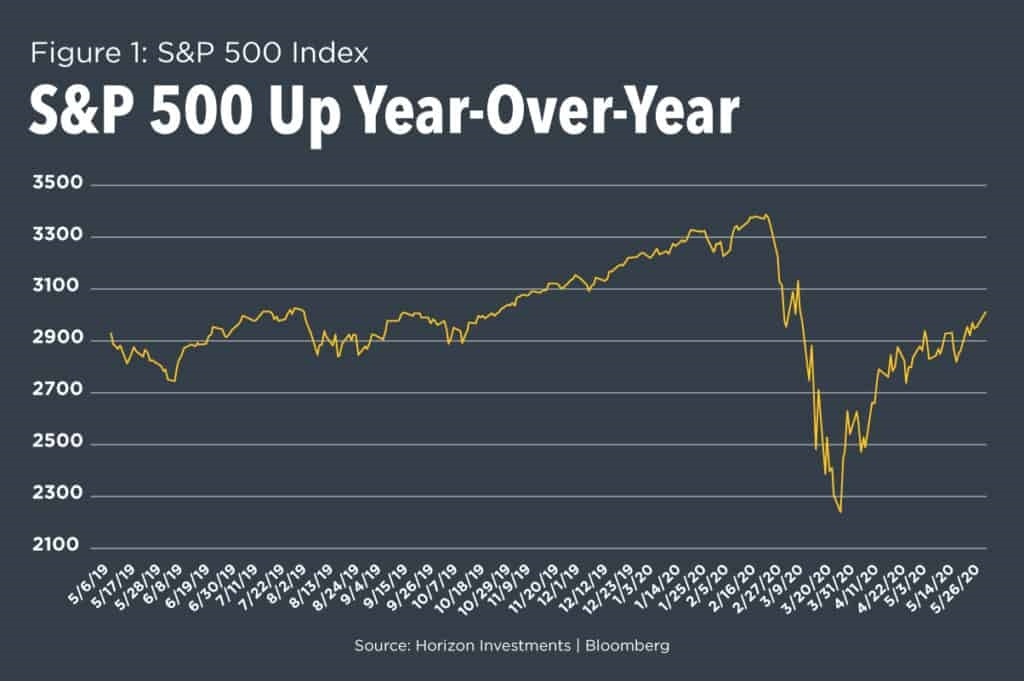 Treasury yields shot higher on Monday amid the optimism, but then faded throughout the week, closing up just a few basis points (bps) week over week. The 2-year and 10-year were up 2 bps and the 30-year, 4 bps. The reopening of the 20-year bond for the first time since 1986 also drove the curve steeper. Uncertain of the end demand, the market took rates higher going into the auction but it traded well after issue, showing that there is plenty of appetite for longer-dated U.S. debt. With rates at zero indefinitely, we think this will continue.

While short-term rates in the developed world were already at zero last week, a few emerging market central banks that still had room to cut did so. It now appears that almost every central bank is headed to zero, further compressing yields, especially on safe, high-quality fixed income. This is another reason we don’t see long-end rates shooting higher anytime soon, despite the budget deficits.

As the Fed enters its second week of corporate bond buying, credit markets traded well, with investment-grade (IG) and high-yield (HY) debt down 9 and 61 bps, respectively. Despite Fed support, credit markets have yet to fully heal. HY spreads have retraced about 40% of their recent widening, while IG has retraced about 60%.

Large companies, generally speaking, have been able to avoid bankruptcy thus far. But because the economy’s recovery could very likely be a grinding one, we expect more defaults in the future. Companies already in a weakened position and laden with debt prior to the pandemic borrowed even more in early 2020 just to keep the lights on. But this isn’t the kind of debt that pays for itself. In other words, it’s not funding future productivity. With a potentially bigger wave of bankruptcies looming, we aren’t inclined to chase the extra yield available in the HY market until there is more economic clarity

USD sells off except against Chinese Yuan

The U.S. Dollar (USD) sold off broadly last week, with one noticeable exception — it strengthened against the Chinese yuan [Figure 2]. Bilateral currency valuation was a big sticking point last summer in the U.S.-China Trade War. The signal from this market flies in the face of the optimism the equity and credit markets are broadcasting.

For now, markets appear to be overlooking the fact that the two largest economies, the U.S. and China, are moving farther and farther apart. Tensions are increasing, even as both economies continue to struggle to recover from the impact of the coronavirus. We think this is likely to become a bigger issue in the future and bears close watching. 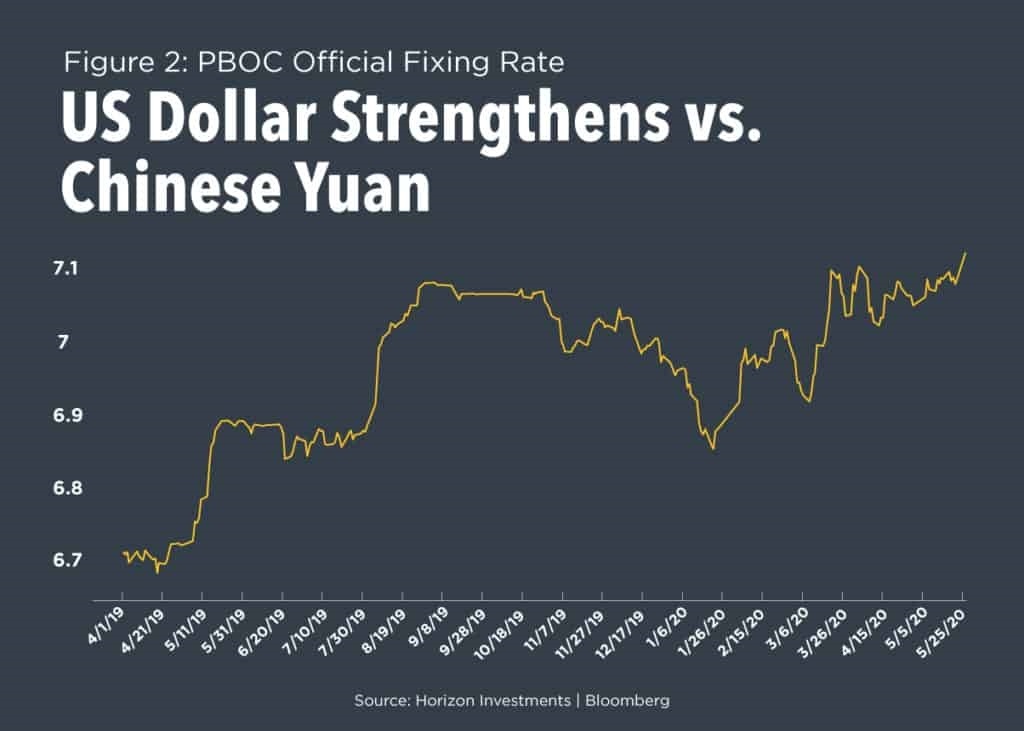 After a two-month delay due to the virus outbreak, China opened this year’s session of the National People’s Congress on Friday, making news on various fronts. They’ve dropped their numerical growth target, instead opting to target domestic employment. This admission, coupled with its smaller than expected fiscal stimulus package, dampened enthusiasm around an aggressive global growth impulse from China this time around. While China pledged during the session to uphold the Phase One trade deal signed in January, based on the current purchases of U.S. exports and the state of the global economy, that promise looks impossible to us. Indeed, President Trump acknowledged this and threatened to rip up the deal this past week.

What to watch this week

Tensions with Hong Kong flared due to the mainland’s introduction of a new national security law that the White House National Security Adviser called a “takeover” of Hong Kong. This is likely to be a point of tension between members of Congress and China — expect bills and threats of sanctions to follow.

U.S.-China relations are deteriorating, and fast. At a minimum, tensions are likely to intensify as the U.S. Presidential election season gets going in earnest and the issue becomes even more politicized.

All 50 states have now opened up to some degree, and market participants will be closely watching how events unfold on both economic and health fronts.

About 1 in 4 workers have applied for unemployment insurance benefits since shutdowns began. While last week’s jobless claims declined, the addition of another 2.4 million newly unemployed brings the total number of layoffs since the pandemic began to a record 39 million. While we expect new claims to continue to decrease, the number of people currently unemployed who are seeking insurance benefits will continue to put an alarming strain on states’ unemployment trust balances.

This week will give us several measures by which to assess the health and optimism of the U.S. consumer. The Conference Board Consumer Confidence comes out Tuesday and the University of Michigan Consumer Sentiment Survey on Friday. In addition, Friday brings a look at U.S. personal income and spending.

The Federal Reserve announced that Fed Chairman Jerome Powell will appear in a webcast discussion with former Fed vice chair Alan Blinder on Friday at 11 a.m. EDT to discuss the state of the economy and the central bank’s efforts to stabilize it.